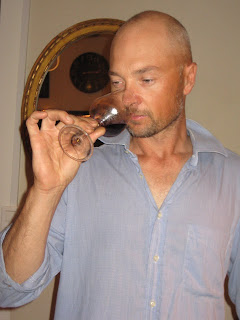 Although Domaine de la Prose is so close to the urban sprawl of Montpellier, the vineyards are wonderfully isolated. You take a narrow track off the road between the villages of St. Georges d’Orques and Pignan and gently climb, praying that nothing is coming into the other direction, as there would be a distinct possibility of one of you landing up in the ditch. I was lucky; a large lorry delivering bottles was still unloading as I arrived….. Had I been ten minutes later ….

Bertrand de Mortillet is a bright young man who studied at Bordeaux and worked at Château Montrose and in Corsica, and when his father bought Domaine de la Prose in 1989, he gave Bertrand a small share of the property, as well as the responsibility of creating its reputation. Basically he was starting from scratch; previous wines from the estate had been sold in bulk. A simple cellar was built; vineyards were replanted and 1995 was the first vintage. The vineyards are all relatively close together, 13 hectares at about 110 metres in altitude, on the first hills facing the sea, and they have been registered as organic since 2004. Bertrand is lucky that he does not have any close neighbours to contend with, and he tries to follow the biodynamic calendar ‘as it makes you think’. He mentioned how his winemaking style has evolved. Initially he favoured a lot of élevage in oak; now he uses barrels much less.

2010 Cadières blanc, St. Georges d’Orques – 8.50€
A blend of 40% Vermentino and 60% Grenache blanc, which are fermented separately and then blend at the first racking and left in vat until February when the wine was bottled. On the nose I found the slightly sappy, herbal notes of Vermentino, while on the palate there was the weight of Grenache, with white blossom and a ripe rounded finish. Cadières means cailloux or stones in Provençal and there is indeed a lot of white limestone in the vineyard.

2010 Embruns blanc, Grès de Montpellier – 13.00€
A blend of Roussanne and Grenache Blanc, and with just two barrels blended with a 25hectolitre vat, there is a touch of oak on the nose and palate, but it is nicely done, so that it adds body and weight, and a hint of honey. It should age well.

2009 Cadières rouge, St. Georges d’Orques – 8.50€
A blend of Grenache Noir, Syrah and Cinsaut. Medium colour, with fresh cherry fruit on the nose, and some acidity as well as tannin. Bertrand explained that he likes to pick his grapes relatively early to avoid high alcohol levels – this is a modest 13˚ - and this year with everything so advanced, he anticipates the harvest starting in mid-August. And when I asked about the typicity of St. Georges d’Orques – and he emphasised fraicheur and finesse. I certainly couldn’t disagree, based on 2009 Cadières.

2008 Embruns rouge, Grès de Montpellier – 13.00€
Embruns describes the marine mist and cloud, rather like the weather on the morning of my visit. The wine is a blend of 85% Syrah, with old vine Cinsaut and a little Carignan. The Syrah, and also Carignan, is kept in vat and the Cinsaut in barrel. Deep colour. Quite firm and closed on the nose, with a more expressive palate. 2008 was a cooler vintage, and this is quite elegant, with some appealing cherry fruit and rounded body. Bertrand emphasises that he looking for elegance, not weight, and he wants wines that will emphasise his terroir. And for this reason he no longer uses any new wood.

And our tasting finished with 2007 la Grande Cuvée, St. Georges d’Orques – 22.00€
Half Syrah aged in vat, and half Mourvèdre aged in barrel. Good colour; elegantly smoky oak and on the palate. Quite firm and structured with good tannins and some spicy fruit. Nicely balanced. Should age well.

And then it was time to head for Montpellier airport to meet my husband. Fortunately there was nothing coming up the hill.
Email Post