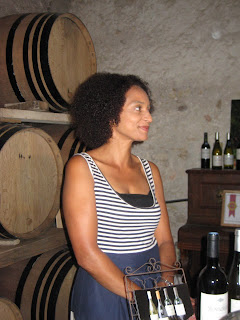 I never cease to admire people who have the courage to give up everything to follow their dream. Take Dhanya and Nova Collette at Domaine de Montazellis, between Alignan-le-Vent and Abeilhan in the Côtes de Thongue. Dhanya is a musician and Nova worked in the fashion world, and then with one young child, and another on the way, they decided to leave the London rat race and buy a rundown property outside Pézenas. Their experience of wine, apart from drinking it, was zilch. But they were not deterred. Dhanya is eminently practical, as well as musical; he has restored their house and cellar. He has, however, kept a drum kit and an old piano in the cellar, and they are planning musical evenings. The previous owner had sent his grapes to the coop and the house had not been lived in for years. And so Dhanya took a course in Pézenas to learn the rudiments of viticulture and winemaking and 2007 was their first vintage.

They have nine out of twelve hectares in production, with Mourvèdre, Syrah, Chardonnay, Sauvignon, Cinsaut, Carignan and Alicante Bouschet, which they are planning to graft with something else. They’d like to plant some Grenache, and may be Rolle and Viognier.

2008 Chardonnay, Côtes de Thongue 8.00€
As I love Chablis, I am not usually particularly thrilled by Chardonnay from the Midi, but it always good to have one’s prejudices upset. This Chardonnay is nicely satisfying; lightly buttery and rounded, with good acidity, giving a nice balance and a dry finish. Twenty per cent of the blend was vinified in new oak, which filled out the edges.

2008 Merlot, Côtes de Thongue – 5.50€
This is another grape variety that I am not mad about it when it comes from the south, but here again, I was very pleasantly surprised. Medium colour; lovely spicy red fruit, with soft tannins and fresh finish, and a lift on the finish. The wine is given a long, five to six week, maceration, with some remontages at the beginning and some pigeage at the end, and they also use some fresh oak chips (not toasted ones) during the fermentation, which adds an extra layer of flavour. Yields are low, about 30 hl/ha. The Merlot is grown on north facing sandy slopes and was planted nearly 30 years ago.

2008 Syrah, Côtes de Thongue - 6.50€
Good colour; some rounded fruit, with a touch of peppery spice. Supple tannins and a hint of orange pain d’épice on the finish. The vineyards are south facing on semi-coteaux.

2007 Cuvée Etienne – named after their son, and Dhanya’s very first wine. 11.00€
A selection of Syrah, aged in oak. Deep colour; some orange confit notes, quite ripe spicy and rounded, with some tannin. I could criticise it for being a bit jammy on the finish, but it was his first vintage. I, for one, could certainly do no better.

2008 Kaiya – after their daughter. 12.00€ for a 50 cl. bottle
The name means ocean in Japanese. And the wine is made from Sauvignon, half from raisined gropes and half from grapes with botrytis, picked at the end of October, with 22˚ potential alcohol, and 80 gms/l residual sugar. They made just 300 litres in a tiny stainless steel vat. The taste is lightly honeyed and lemony on the nose, with good acidity and fresh honey fruit on the palate, and an elegant finish.

And Dhanya and Nova are full of projects for the future. They deserve to do well. 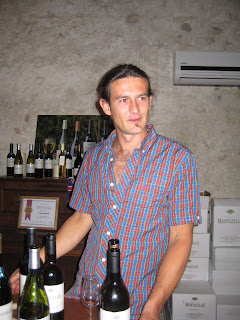 Anonymous said…
My office in Online pharmacy reviews was moved to France , in this country I tasted the most delicious wines in my life
6 December 2011 at 17:15

Andy said…
Deep colour; some orange confit notes, pretty ripe spicy and rounded
When you have nothing to do or unhappy? What should you do to spend the free time? How about the game? like to get Buy RS Gold in WOW, and how to have theRS Goldwith less money, is there anyway to get the for us? We need to think about this.
21 December 2011 at 06:44