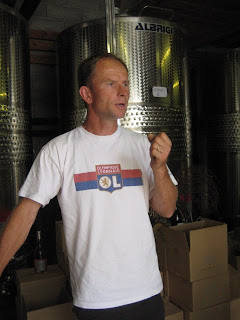 It was a wine from Domaine des Quatre Amours, their Cuvée Louis, which won the top prize at this year’s competition of the Vallée de l’Hérault, and since I had been on the jury for the competition – see an earlier posting - I thought I should go and visit them.

So why four loves? Michel Siohan-Cuny explained that his wife France is the fourth generation of her family in the village of Bélarga. Her great-grandfather had vineyards; her grand father had made wine but it was sold to a merchant and her father had sent his grapes to the village cooperative. They took the decision to put their wine in bottle for the first time in 2007. And they have four children, each with a cuvée named after them. Their vineyards are at Bélarga, for vins de pays, and in nearby Aspiran, for appellation wine, totalling 18 hectares in all. And they are now planning a new cellar, which hopefully will be functioning for the 2012 vintage.

2010 Pays d’Oc blanc – 7.50€
A blend of 70% Sauvignon and 30% Chardonnay, Kept in vat. Light colour; quite a fresh nose. This is not my favourite blend of grape varieties, but the palate was fresh and simple, with some fruit and acidity.

2010 Cuvée Olga – after their first daughter. – 10.50€
A blend of 70% Roussanne, fermented in barrel, with four months élevage and 30% Chardonnay, kept in vat. Light golden, quite a solid rounded nose, with a touch of dry oak. The palate is quite rounded, with white blossom and some texture, with fresh acidity.

2010 Pays d’Oc rosé - 7.50
A blend of Syrah and Grenache – 25 / 75. Hand-picked at night and pressed to give a pretty colour. Blended after settling. A delicate fresh nose. They aim for a pale colour and a delicate palate with fresh acidity and some fruit. They are wondering about planting some Cinsaut for their rosé and may be also some Mourvèdre, which they don’t have either.

2010 Perle de Rose - 7.50€ after their youngest daughter. This is the same blend, but slightly sparkling, with some CO2 added at the end of the fermentation. Very pale colour; a dry nose, and on the palate a faint prickle, some fruit and a touch of sweetness on the finish.

2009 Pays d’Oc – 7.50€
A blend of 45% each of Merlot and Grenache, with 10% Carignan made by carbonic maceration. All kept in vat. Quite fresh and peppery, with a rustic note from the Carignan. Medium weight with ripe fruit.

2010 Le Carignan de Paul – who is their oldest son. Pure carbonic maceration. The vines were planted in 1958, by France’s grandfather. Deep colour; quite perfumed nose, rounded spice on the palate; youthful with a tannic streak with a tannic streak on the finish. . 10.50€

2009 Cuvée Louis, Coteaux du Languedoc – 15€
75% Syrah, vinified by carbonic maceration and put in wood for the male-lactic fermentation, and 25% Grenache which was kept in vat; blended after 15 months.
Quite spicy confit fruit. Quite warm and ripe, with the supple spicy flavours of carbonic maceration. Easy drinking.
Email Post

Graham said…
Came across them at a fair in Canet last year, but it was far too hot to taste reds. Left with the impression they were very well made wines. I knew they had vineyards in Aspiran - very smart move. Do you recall if they mentioned the terroir of their vines at Aspiran (e.g. basalt)?
1 July 2011 at 10:49

Rosemary George MW said…
Sorry thought I had the answer to that question in my notes - a quick email should produce an answer. Will keep you posted. And thaat's the trouble with summer wine fair - you are boiling and so are the wines.
3 July 2011 at 12:56

Andy said…
Left using the impression they have been extremely properly produced wines. I knew they experienced vineyards in Aspiran
How can we get the best Runescape Gold,through the internet or the players in the game? Can we Cheap Runescape Gold with cheap price or other ways else?
21 December 2011 at 06:44