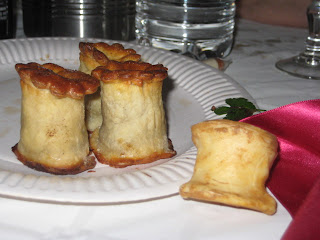 Every wine area of France has its own wine brotherhood or confrérie, and so do many of the regional gastronomic specialities. The objective seems to be promotional, an opportunity to sing the praises of the wine or dish, and to consume lots of it, and it also provides an opportunity for otherwise sensible men and women to besport themselves in medieval robes. And you have to remember that it is an honour to be invited to join a confrérie. So last Thursday I found myself being made a member of the Très Noble et Très Gourmande Confrérie du Petit Pâté de Pézenas. There is quite a hierarchy, with a grand maitre and a chamberlain, and the lower orders enjoy the title of Chevalier. I learnt that ladies are addressed as Madame le Chevalier. I am not a chevalière. 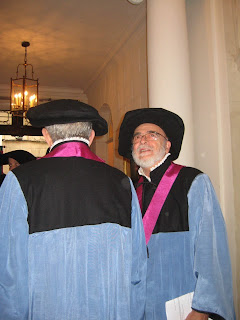 The ceremony itself was great fun – it was pouring with rain in Pézenas that morning, so it was an agreeable way of passing the time. We were six to be gonged; another English woman, who came from Market Drayton – more of the significance of that later – a chocolatier; a local traiteur or caterer; the owner of one of town's better restaurants, le Pré St. Jean; the director of the Pézenas coop, la Cave de Molière, - so no prizes for guessing what we drank with lunch. 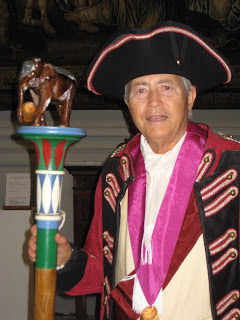 The ceremony took place in the rather charming museum, l’Hôtel Vulliod de St. Germain, which houses various artefacts dating back to the time of Molière. We each had a godfather who made a charming little speech explaining why we should be members of this august organisation, and then we were required to swear to do everything in our power to extol the praises of the petits pâtés and then eat one ourselves, and wash it down with a glass of the coop’s Chardonnay. And then we adjourned for lunch.


So you may well ask – what is a petit pâté. It all goes back to Lord Clive of India, who spent a winter in Pézenas in 1768. He brought with him his Indian cook, who concocted a recipe for a little pie, filled with mutton, and seasoned with spices, a touch of curry, brown sugar and citrons confits. No self-respecting baker in Pézenas is now without petits pâtés. Lord Clive was born in Market Drayton and consequently Pézenas is twinned with it and maintains strong associations with the town. 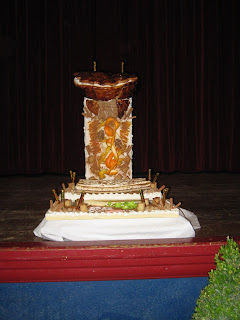 And as this chapître or meeting marked the 20th birthday of the confrérie, lunch concluded with a birthday cake, along with a model cake, incorporating the various ingredients of a petit pâté, complete with fireworks. There were also a couple of musical interludes; between the fish and the meat course, we were treated to extracts of La Traviata, while the songs between cheese and birthday cake finished with Maria from Westside Story. And a good time was had by all. 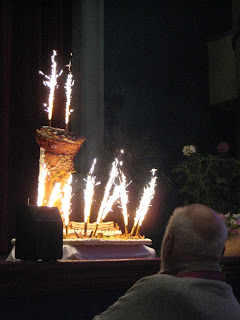 And yesterday I noticed a short paragraph in our local paper, le Midi Libre, entitled Les Femmes et le Vin. The coop at Pomérols, and one of the leading producers of Picpoul de Pinet was hosting a conference about women and wine, and also offering a tasting of its award winning wines. The wines were really the main focus of the evening, and excuse for a party for the village. The conference turned out to be short and sweet, and did not offer any new insights; the president of the cave welcomed us all; a journalist from the Midi Libre eloquently introduced the various speakers – a couple of women who are members of the cooperative, who said how helpful their male colleagues were – and an oenologist who emphasised that the work of an oenologist goes from vine to bottle, and does not just concentrate on wine-making; she conducts a lot of tastings and enthused about the quality of the female palate. They agreed that they ‘shared the passion of our work’. There was a local artist and a local poet who read a poem about Picpoul, finishing with a line exhorting us to enjoy it in moderation.

And that was the cue for the tasting. I was the lone person to use a spittoon and the Picpoul, 2010 Cuvée Hugues de Beauvignac, boasting its gold medal from Paris, was indeed very good – with some lovely stony salty mineral fruit. I was less struck by the sparkling version and the moelleux was not a good idea. Moral : Picpoul should be dry and still – and then it can be delicious.
Email Post

So how should I address you now?

a very good and compleet article for the famous Pâtés
congratulation Rosemary. In our place we often organise Wine tastings,...perhaps on with you sometimes....
carole
11 June 2011 at 15:44