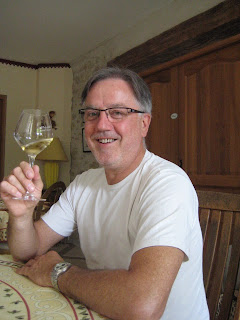 As well as making wine, Serge Schwartz runs a chambres d’hôtes with his wife, so we tracked him down at the Villa Juliette in Pézenas, in an elegant house behind a high wall and a big iron gate. He is a newcomer to the world of wine. He comes from northern France, from Lorraine, and went to hotel school in Strasbourg, and has gently gravitated towards wine. ‘One of these days’, he said to himself. And why the Midi? He was looking for sunshine and light. The chambres d’hôtes came first; and he met a group of local vignerons from Caux, people like Daniel le Conte de Floris, as well as Jean-Pierre Vanel from Domaine la Croix Vanel and Philippe Richy from Stella Nova, who all shared a viticulturalist, Jean-Pierre Sanson. And then in 2007 Jean-Pierre Vanel has a plot of Carignan that he was not going to pick, so Serge bought a vat, picked it and made 500 bottles. And in 2008 he teamed up with Jean-Pierre Sanson, and Villa Tempora was born. He now has six hectares, Carignan, Syrah, Grenache as well as a hectare of Bourboulenc, mainly in Caux, as well as a small plot in nearby Neffiès. The vineyards are being converted to organic viticulture and will be certified for the 2011 harvest. And he has found a cellar in the centre of Caux, which has not been used for about thirty years. His barrels have just been relocated. And with his six hectares, he has six different plots, with different soils – there are villefranchien, galets roulées; argilo-calcaire, gravel and basalt. And although he is a newcomer to winemaking, he has a formation ‘de cuisine’ and he reckons that has helped a lot. It’s very close; you can envisage a future taste.

We sat and tasted at the kitchen table.

First came 2009 Un temps pour elle. AC Languedoc. 11.80€
From twenty-five year old Bourboulenc vines, as well as some Marsanne. Bourboulenc is the key grape variety for white la Clape. Serge uses natural yeast and described his wine making as a vinification bourguignonne with lees stirring in barrel and fourteen months élevage. He uses 400 litres and 228 litres barrels; none of them are new. He has a good source of secondhand barrels.

The wine is lightly golden, with some oak and hints of iodine on the nose, a hint of the sea and oysters, with some firm fruit and structure on the palate. It is quite textured with a hint of fennel and herbs and some mineral notes. And with a long finish, it was very satisfying.

2009 Villa Tempora Pézenas AC - 7.80€
A blend of 40% Carignan, 30% Syrah and 30% Grenache Noir. 85% of the blend is kept in vat, a 30 hectolitre vat per grape variety, and the remaining fifteen percent is a blend of all three grape varieties which stays in barrel. Deep colour; some smoky fruit with quite a firm mineral palate. Medium weight. Good stony notes, with some red fruit. Youthful tannins. The wine is blended as late as possible, about a month before the next harvest. Serge finds blending ‘la partie la plus excitante’. He considers organic viticulture to provide freshness and a lift on the finish. Serge is aiming for what he calls vin droit – a wine that is true to itself, with good fruit, from the terroir to the bottle.

2009 Le Démon du Midi, Pézenas - 11.80€
I didn’t know that the French expression, le démon du midi, describes a mid-life crisis, so the name is a play on the concept. The blend is 70% Syrah with 15% each of Grenache Noir and Carignan, of which 85% is kept in two to three year old wood for 16 months. Good colour, with a delicate note. A hint of orange. Quite a rounded palate, with elegant oak and some tannin. Medium weight; balanced and youthful, with a fresh finish. It needs time. Serge observed that freshness is one of the most difficult things to achieve in the Midi.

And asked about projects for the future, he said he would like some Mourvèdre and he has two hectares to plant, probably Grenache Noir, and some white varieties, Marsanne, Roussanne and Grenache Blanc. And of course he is looking forward to his new cellar. He comes across as a thoughtful wine maker. The decision of when to pick is the work of a whole year. ‘C’est un bel aventure’.
Email Post