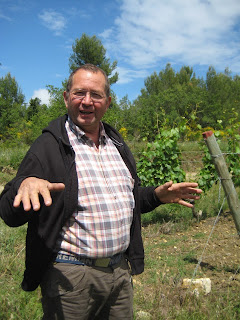 Domaine de Mouscaillo is one of the few independent wine growers in the small village of Roquetaillade, which is situated in the Haute Vallée de l’Aude. Pierre Fort explained how it is a region of contrasts; you have the influence of the Mediterranean, and of the Pyrenees. The grapes ripen well, but the Pyrenees bring cool winds, which enhances the acidity in the wine. He took us to see his main vineyard – he has just four ectares – and then showed us a spot where you can see quite clearly two different types of vegetation. To the east was the scrubby garrigue of the Mediterranean and to the west the pines of a cooler Pyrenean climate.

Unlike most wine growers in Limoux, Pierre makes no sparkling wine – just Pinot Noir and Chardonnay. His first vintage was in 2004, and with just four hectares, three of Chardonnay and one of Pinot Noir, he is very much his own man, with a vineyard that he can manage without any extra hands. Although he was born in Roquetaillade, he has worked in other vineyards, notably spending ten years at Chateau de Tracy in the Loire valley. There he made friends with the iconic winemaker, Didier Dageneau, who encouraged him to make his own wine. He acknowledges the debt – 'without Didier I wouldn’t be here'. There were already vines in the family, his father’s, but they belonged to the village coop. 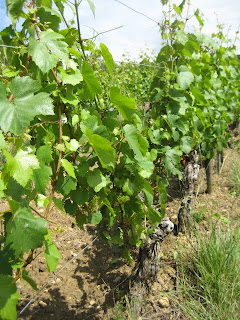 He has two plots; the oldest, Chardonnay, was planted in 1970; it is south-facing and the other, Chardonnay and Pinot, which is north facing, is 16 years old. There is a difference of at least two weeks between the harvest dates. Pierre explained that having worked in the Loire, he liked acidity. He is quietly ambitious: 'I wanted to do something better than the others, and I couldn’t do that with sparkling wine'. He is articulate on the subject of organic viticulture – refusing to accept its dogma. 'It’s easier to sell bio. The environment is very complicated; you can’t have the same rules for France as for Australia'. Essentially he works the soil as little as possible, but you must remove the grass. His soil is quite deep, and packed with lots of minute fossils. The vines never suffer from drought. 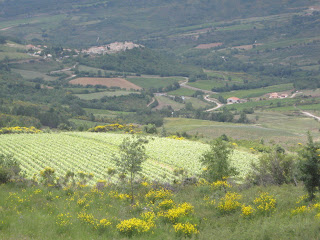 And then we adjourned to his cellar for some barrel tasting. It almost seemed as though I was in a cellar in the Côte d’Or. The Chardonnay from the south facing slopes was riper and richer than that from the north-facing slope, but none the less with good acidity. The wine from the north facing slope seemed more concentrated with firm intensity and tightly knit fruit. And samples of 2010 Pinot Noir displayed some lovely varietal character, with liquorice and raspberry fruit and a firm streak of tannin. The most difficult thing is to manage the tannins – observing that a neighbour picks his Pinot Noir three weeks later. 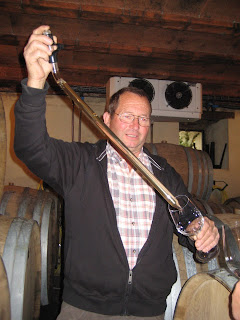 And then we tasted some bottles:

2009 Pinot Noir, Vin de Pays de la Haute Vallée de l’Aude– NB the appellation of Limoux rouge does not include Pinot Noir, which seems a complete aberration to my mind, given that Limoux is one of the best places of the Languedoc for Pinot Noir, but apparently the political clout of one or two of the bigger producers influenced that decision. Pierre’s Pinot Noir was delicious. It has spent a year in barrel and following some bottle age has some dry raspberry fruit, with quite firm tannins and underlying silky elegance.

And we finished with a 2004 Chardonnay, Pierre’s first wine, made when he was still working in Sancerre. It was still fresh and elegant, with good acidity, and a hint of fennel on the palate. And that was the end of a great day in Limoux. 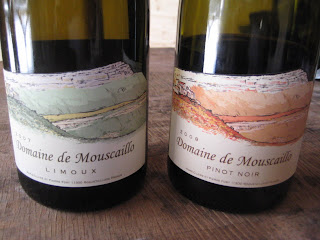