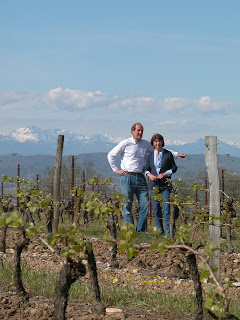 I’ve tasted Rives-Blanques and visited Caryl and Jan Panman regularly over the last ten years, since their first vintage in 2001. They are a Dutch-Irish couple, with successful careers in other fields, and then it was time for a change and they settled outside Limoux, buying their vineyards from Eric Vialade, who has stayed on as their winemaker. It seems a very happy arrangement and the range of wines has evolved over the years. So my visit last week was a good opportunity for a catch-up; Caryl and Jan are the most welcoming of hosts, not to mention their three dogs Bruno, Bacchus and Mauzac.

Normally you can enjoy the most spectacular view of the Pyrenees from the tasting room at Rive Blanques, but not that day. And their estate is named after the mountain that usually dominates that view.

2008 Blanquette de Limoux – 9.50€
The appellation regulations dictate a minimum of 90% Mauzac, and here it is blended with 10% Chenin Blanc. You may also use Chardonnay, but not Pinot Noir. The dosage is 4 gm/l – and Caryl admitted that they were tempted by a zero dosage.
Quite a rounded nose, with light herbal notes. Quite crisp acidity; light and elegant. It is deliciously and fresh, and eminently drinkable, as I know, all too well!

2008 Crémant de Limoux, Blanc de Blancs – 9.70€
A blend of 60% Chardonnay, with 40% Chenin Blanc. In theory there ought to be 10% Mauzac as well. The wine has spent at least eighteen months, if not 24 months on the lees. It is ripe and rounded, with some attractive fruit and a creamy finish. An elegant, creamy mouthful.

2008 Crémant de Limoux, Rosé – 10.55€
Essentially two thirds Chardonnay to one third Chenin Blanc, with 5% Pinot Noir. A very pretty pink, with dry herbal fruit. Delicate and powerful at the same time. You sense the presence of the Pinot Noir, which gives structure and fruit, but the overall effect is delicate and ethereal like the mountain air. Beautifully balanced. 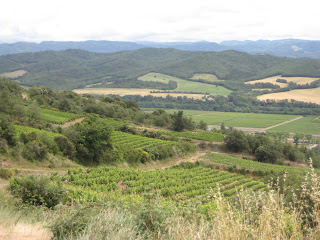 And now on to the still wines:

2010 Vin de Pays d’Oc, Chardonnay / Chenin – 5.80€
The blend is 90% Chardonnay to 10% Chenin Blanc. The grapes are machine harvested in the middle of the night, around 3 a.m. and then sorted and pressed and the wine bottled after a short élevage in vat. In contrast the appellation regulations for white Limoux demand an élevage in barrel. This is light and buttery, with some understated rounded fruit, a herbal hint and some fresh acidity.

2010 Limoux Cuvée Occitanie – 10.85€
A pure Mauzac, from grapes that are picked at the end of the harvest, so three weeks than for the sparkling wine. Caryl is very enthusiastic about Mauzac; she loves it and people had stopped making it. ‘It’s a real Cinderella’, and not really appreciated, so they decided to have a go at a still Mauzac back in 2003 and it has now become a regular part of their repertoire, but so far only one other producer has followed their example. The wine has only just been bottled, so oak does dominate the palate for the moment, but with a satisfying mouthful, with good acidity, a herbal hint and some nutty notes. It will be intriguing to see how it develops.

2008 Limoux Dédicace, Chenin Blanc – 10.85€
Dédicace as they dedicate the wine to a different person each year. 2008 says Pour MM – Monica Murphy who was their Irish importer. The 2010 vintage is for George Pauli, who was the technical director of Chateau Gruard Larose and has helped with their blending for the last eight years.

This 2008 is light golden in colour, with some honeyed leafy notes and good fruit on the palate, with some underlying oak. The 2010 has only just been bottled – they will leave it in the cellar for at least 12 -1 8 months before releasing it. Again there was a touch of oak with some dry honey and a satisfying mouth feel with good acidity. It promises well, with good ageing potential. I have enjoyed mature vintages of this in the past.

2009 Limoux Trilogie - 17.20€
No prizes for working out that Trilogie means all three white grape varieties of Limoux. The proportions vary with the vintage, but Mauzac accounts for about half the blend in 2009, while the 2010 includes more Chardonnay. Quite rounded; quite textured palate, youthful with layers of flavour and depth and a hint of honey on the finish.

2010 Limoux Odyssée - 10.85€
Pure Chardonnay, with 20% new oak. Ripe, buttery and youthful, with some fresh fruit. The oak is well integrated and quite restrained.

2009 Vin de Pays d’Oc, Sauvageon – 10.00€
Sauvageon is the clue that it is Sauvignon, but they didn’t want to put Sauvignon on the label. 2009 was the second vintage, after a very small crop in 2008, for the vines were planted in 2005. As for Limoux, the wine is fermented in barrel and the oak is nicely integrated, with some restrained Sauvignon fruit and good body and texture with balancing acidity. A harmonious mouthful, promising well with some bottle age.

2006 Lagremas d’Aur, Vendange d’Hiver, Vin de Table de France 13€ - 50cl bottle
This is late harvest Chenin Blanc and Mauzac, harvested in January. There is a little botrytis, but the grapes are mostly raisined. The name means tears of gold, and you could say, that it is what the wine looks like, with quite a deep golden colour, with fresh honey and barley sugar on the nose, and more on the palate, with some fresh fruit and some roasted hints of botrytis. 70 gms/l residual sugar remains. It is absolutely delicious, and perfect with fruit puddings. 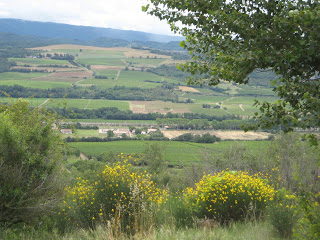